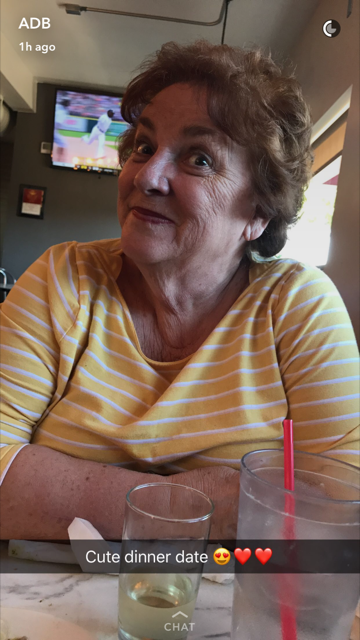 I went out on a date with my Grandson, Aaron, and he took this picture of me AND put it on Instagram!  My first reaction was OBOY–look at those wrinkles!  (I’m aware that everyone has their own vision of themselves–mine was somewhere between Connie Stevens and Sofia Loren.  Oh well).

ANYWAY, I began to think about wrinkles and what they do for people.  Maybe somewhere along the line I should have thought about a nick or tuck here or there.  But   I kind of like faces that move, and faces that show the smile lines.  And faces that show their real emotions.  So this is me!  Now, while we are on the subject of wrinkles, I began to think about a recipe for something with wrinkles.  Sauteed spinach?  Something with Ruffles Potato chips? (they have ridges)….Lettuce?  So many thoughts.  Suddenly  Michael, my Granddaughter, suggested raisins.  And to be honest, that’s probably the best one, if I liked Raisins.  All I know about them is that they are dried up grapes, and if I wanted to have grapes, I go for the liquid kind.  However, here is a little tip about raisins I came up with, as I found I could tolerate them better in recipes.  To use them, I always “plump” them first:  Bring some water to a boil, drop in the raisins.  Cover the pot and turn off heat.  Let them set a few minutes.  At least they are juicy then….

But another thought from Michael struck me.  Dumplings!  I have some tricks for Chicken and Dumplings (the kind us West Virginia folks make and love….)

This will not be a detailed recipe, as I am going to tell you to make a nice chicken broth the way you would normally make it for chicken noodle soup.  If you make soup, you already know how to put a bony chicken or chicken parts  in a pot, add a couple of chopped carrots, chopped celery, and 1/2 a chopped onion.  Cover with water and add some flavoring (bouillon cubes are out–too salty.  So use some of that Chicken base, like ‘Better than Bouillon’. )  Be careful not to add too much– About 1 tsp per cup of water.  OR, you can just buy a big Swanson can of whole chicken and add some more canned broth.  Anyway you want to start is fine with me.  But you need to strain the broth whenever you like the flavor and have about 6 cups.  Add  some chicken you have picked from the bone back into the broth, and any vegetables you’d like to re-use.  Now, the dumpling part.  SURPRISE!!   I use BISQUICK!  But I do have a couple of tricks to make your dumplings lighter.  Mine always used to have a gummy spot in the middle.  Here goes:

Make the dumplings according to the box directions, EXCEPT use Club Soda for the liquid instead of milk.  Also, add 1 Tbs. baking powder to the dry mix.  Everything else is the same.  Be sure you follow the parts about covered and uncovered.  This is one of our favorite things.  I sometimes have extra broth left, and I make MORE dumplings…..that’s how much we love them.    Have fun!