Years ago we figured out that the cheapest way to serve Alcoholic Beverages at a party was to make a “Signature Drink”.  No need for a $200 bar where people get sloppy and make their own drinks on your dime!  I’ve done “Big Red” for my red headed girlfriend Lauri, (that one had cinnamon schnapps);  and a “Suzy Q”  for my daughter in law’s Big Birthday….she love Greyhounds, so we did grapefruit juice, vodka and a splash of ginger syrup….I have posted a couple of these before, but on the off chance that all of you have not read all 115 posts on this blog, I think I’ll repeat some fun ones!

JOHN BURLESON’S MARGARITA (he didn’t invent it, but he perfected it!)

No kidding.  Just trust me.  The beer is always a surprise to people who are used to making margaritas that contain other expensive ingredients–such as Grand Marnier, or Cointreau.  Blend this thoroughly in a blender and serve in a pretty pitcher.  It separates, so stir it frequently.   NOW, to add to add to the volume and serve more people, (and also for those who do not like strong drinks), when you are blending, add a can of peaches, or pears, or mixed fruit (do not drain).  You could even add a frozen package of strawberries!  This makes an awesome  fruit margarita!

Here’s another good one:

Let’s call this one:

HUMBLE ABODE (named so because I used some ingredients I had leftover–such as the peach vodka.)  Don’t be scared to try new combinations.  This one was new to me.

1 can Hawaii’s own fruit juice (any flavor you like)

Fill can with vodka, gin or clear tequila.  I used Peach Vodka this time

Blend till smooth, put into a pretty pitcher and stir before serving.  These are pretty to garnish with a peach sliced thinly on the top or edge of the glass.

NOW, ONE MORE YUMMY (Thanks Allison).   The kids came up to the cabin recently, and when they come I try my best to clean out the liquor cabinet.  We had some “Liquor 43” which has a very unusual flavor.  Allison happened to know about a drink from PF Chang’s which she described as YUMMY so that’s what we will call it. (the PF Chang’s drink is called Key Lime Martini.)

Cook44 note:  the next time I make these, I will make a simple syrup with lime so that I have a jar of the sweet lime syrup.  That way I will simply do 2 oz. of the syrup  instead of the separate juice and syrup, then adding the cream.   HOW TO MAKE LIME SYRUP:  There are lots of ways, but I would do 1/2 cup fresh lime juice, 1/2 cup water, and 1 cup white sugar.  Stir and bring to a boil cooking just till the sugar is dissolved.   I would also throw the lime peels in while I’m boiling the syrup, removing them of course when all the sugar has dissolved the the syrup is clear.  This stores forever in the fridge! 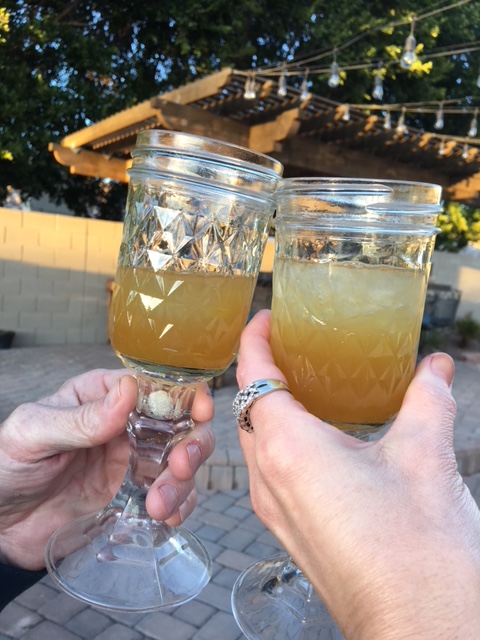 HAVE FUN AT YOUR PARTY!

One thought on “ADULT BEVERAGES….and tips on giving a cheap party!”