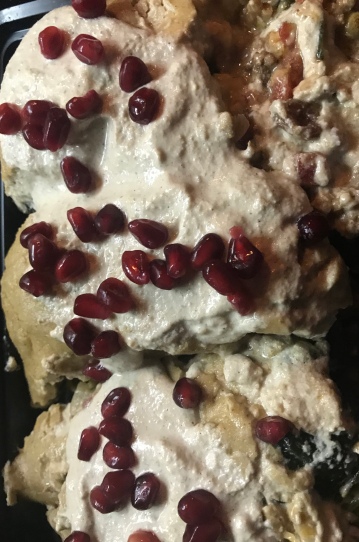 I was recently watching Beat Bobby Flay (one of my favorite shows on Food Network), and I saw a Chef Fernando Ruiz beat Bobby with this unusual dish.  I’ve lived In the Southwest since I was 5 years old, and both studied and taught (and eaten plenty of) Mexican cooking.  I have NEVER heard of this dish.  Similar to a Chili Relleno, but with this very unusual sauce made from cream and walnuts.  And that is the essence of this dish.  I also learned that it originated in the small town of Pueblo, Mexico.   Here is  my version:

3 or 4 Poblano Chilies, Put under broiler for a few minutes until “blistered” and then put into a plastic or paper bag for a few minutes to make it easier to scrape off skin.  Cut each pepper in 1/2 and set aside.

1 lb. ground beef, (OR Bobby Flay made his filling out of shredded pork shoulder).  Either is fine, but just brown the ground beef  with the onion in a skillet in oil and then add the other ingredients and cook a few minutes.  ***see below for vegetarian version.

1 cup golden raisins (I like to “plump” them first by covering with boiling water and set a few minutes). Not a raisin fan, but plumping them makes a huge difference to me.

Cook all ingredients together and stuff  Poblanos  as evenly as possible.  Put in baking dish.  Set aside.

(I say the most important because I am really anxious to try this sauce on all kinds of other things!).  It has a very mild, comforting, flavor. And, it is LO-CARB! You could add flavorings such as cumin or garlic, but honestly it is SO wonderfully simple this way–I didn’t even add cheese!  (some of the recipes I googled called for Cotijo cheese.  I guess you could put it on top if you want).  ***vegetarian note (Steven…) I think this might be a great sauce on top of a chili relleno type pepper, filled with cheese and no meat….***

This is the only part of the recipe that I would call unusual and slightly difficult: toasting and peeling  the nuts.  I always do them in a hot, dry skillet.  And the hard part is judging when they are toasted–but NOT burnt.  I added pecans and Pinons (pine nuts) to the skillet (1/2 cup each).  I wouldn’t  add the pine nuts next time, as they quickly burned.  So fortunately I was able to remove them from the hot pan and mix the other nuts, adding the pine nuts RAW to the blender.  The original recipe called for taking the walnuts out to “peel” the husks from them. This is a little bit complicated, but I just did a “quickie”, removing the loosest skins.   After the toasting, cover the walnuts and pecans with whole milk, and set in fridge overnight.  The ‘peeling’ of the walnuts is to avoid a bitter taste.  But the milk helps rid that taste.  And, to me, the beauty of this dish is the subtle  flavor of this remarkable sauce.  OBOY….when you’ve cooked for over 100 years, its so fun to lean something new!  Who ever thought of walnuts and cream as a sauce???

DON’T FORGET THE POMEGRANATE SEEDS FOR GARNISH!  They are sold in jars in the cold produce when it’s not the season.  Even if you aren’t a Pomegranate fan, these add exactly the right tartness to go with the creamy sauce!

After toasting the walnuts and pecans in a dry skillet, cool and remove as much of the ‘skin’ of the walnuts as you can. Don’t go crazy.  The soaking of the milk helps the bitterness go away.  In a glass bowl or cup, cover nuts with whole milk.  Refrigerate overnight.  Just before assembling the peppers with the filling, and placing in a baking pan, make the sauce by blending the milk, nuts and add at least one cup Mexican cream or “crema”.  I did not add any other flavoring.  But next time I might try something!

This one was fun.  Ask me how I know…