It all started when my wonderful neighbor, Shelley, and I had a long talk about how she hates to cook (or just doesn’t know how), and how she couldn’t believe how much I cook! To her it was too complicated, too much trouble, too difficult and she simply could not believe that she could EVER produce an edible dish.  Of course, I took this as a personal challenge.  Our family is a family of COOKS, so I sent a family text and asked, “what’s the simplest dish you make?”  I got 17 replies, many great ones, but the winner was “sheet pan meals” from my 24 year old Granddaughter, Kelly.  She said these meals got her through college–living with 2 roommates, (fortunately with a kitchen), and many different tastes and preferences.  She, too, wanted to make it “simple”.   So, armed to the whisk, I pledged to Shelley that in the next month I will teach her at least 3 guaranteed simple and delicious dishes that even she can make (and serve to others!) I will share them with YOU too!

It turns out that  sheet pan meals have been around awhile, judging by all the cookbooks for them on Amazon,  but in case you are not familiar, they are simply the method of putting the whole meal on one cookie sheet.  I bought some really nice square  (about 12×12) sheet pans and tried one out last night.

Shelley had a few conditions.  She likes to cook healthy, and even though she likes pretty much everything, she would like to stay in the “good for you” category.  I gave her a long list of foods and asked her to rate them, and she had no serious objections or allergies.  Of course, she likes some things more than others, but generally enjoys all veggies.   Potatoes were a  “maybe” for her, but only because she believes they turn to sugar in your body.  (That’s my next research).

So, in the next few blogs I will bring you some of my “Simply Shelley” offerings.  Today’s production is Baked Salmon with assorted veggies, (beautifully sliced with my Mandoline  slicer–available at Target, Walmart, Amazon, or any good Kitchen store.)  Of course, you do not need to arrange them carefully as I did, but it does make a nice presentation.  So, below I will tell you the steps I took last night with Shelley’s dinner.

A SIMPLE “SHEET PAN” DINNER (lots of choices.  Here’s mine)

1 each:  zucchini, yellow squash, onion, sliced–(also one potato, but we decided we didn’t like the  combo because the potatoes took a little longer than the others).  If you still wanted to have a potato, do it separately.  It doesn’t take the same amount of time to cook.  Ask me how I know.  But I thought nice additions would have been mushrooms, shredded Brussels sprouts, green, red, yellow, or jalapeño peppers.  Green beans and asparagus (which you don’t need to slice),  And, unless you like the green beans crisp, “blanch” them first, which simply means to plunge them in boiling salted water for 2-5 minutes, or till they are cooked to your preference, then roast them on the sheet pan.

Every time I watch a cooking show (even my favorite, Ina Garten), I cringe when they arrange stuff on a pan and then ‘drizzle’ it with olive oil. Consequently, everything is not coated.  So, I like to put each veggie in a bowl (the same bowl, then empty it out and add the next veggie.  Toss it in olive oil (just a couple of Tablespoons, maybe a splash of salt, pepper, garlic powder……and any other spice you like Italian seasoning, oregano, basil, red pepper flakes—come on!  I know you have a favorite!) When they are coated, I like to arrange the slices on a sheet pan. (see above).  But, I have also just tossed everything together in one big mess and baked it that way.  Again, it’s how it’s sliced, and how the veggies fit together. Obviously, thicker cuts, more time.   Practice makes perfect!! 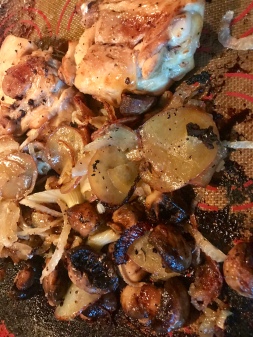 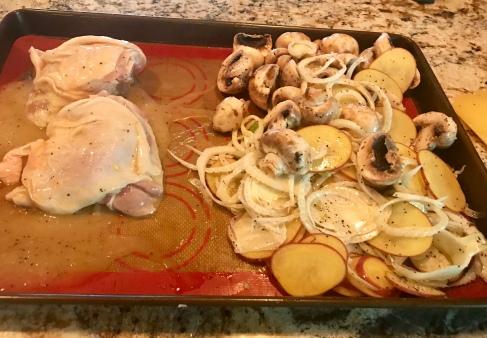 Above is my very first attempt at a sheet pan meal.  It was a disaster! The chicken didn’t get done.  (But  it worked out when I put the thighs back in at 400 degrees for 10-15 more minutes).  So, there is a little bit to learn about how things cook at different speeds and temps.  What’s wrong with the picture above?  The chicken thighs are too fat (and also shaped in “chunks”–thick and thin.  So, obviously the thin parts will cook faster than the fat parts) However, the veggies (mushrooms, potatoes super thin, yellow squash),  are very forgiving, and you can easily cook them “limp” or more crispy.  Some people even like them a little ‘underdone’ (which would only involve about 10-15 minutes total cooking time.  The thickness of the cut is important too.  Keep trying.  Don’t give up!  Before long you will be able to perfect what you like!! I do like a high heat, such as 400, though.

SO, CLASS:    What have we learned today?  Sheet pan meals take a little bit of  practice. If I use chicken, I’m going to flatten it out a little.  I need to learn that thighs generally take longer than breasts.  Bone-in is different than boneless.  So, in the beginning, just start with a simple boneless, chicken breast–and I think putting it into a zip lock baggie with a marinade (anything you like in a bottle to start!) would help the flavor and the moisture. This method with the breast should only take about 15-20 minutes.  So you might want to start the veggies about 10 minutes ahead, then add the chicken.   Of course, salt and pepper and garlic powder always works.  If something isn’t done, just put the undone character back in for 5 minutes at a time, or till you like it.  If you are a thermometer person, chicken should be about 165 degrees in the fattest part.  The idea is to have ONE success, and you will be on your way!   Stay tuned for more tips and recipes in the next couple of weeks.

Now, you may be asking, WHY a sheet pan meal at all?  It’s not going to appeal to everyone, but I’ll tell you who it WILL appeal to!  Somebody with a little tiny kitchen, who wants to make it simple and ONE step. Home alone some nights, I love just the veggies cooked this way.  College students.  Roommates.  After work when you only have an hour.  And, most importantly, someone who is now living alone and had a wonderful hubby who cooked for her every night.  Happy learning, dear Friend!